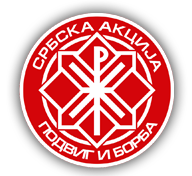 WHAT IS SERBIAN ACTION?

Serbian Action is an Orthodox Christian national-revolutionary movement, whose goal is awakening of the Serbian people from the current lethargy, languor and the false peace of spiritual marsh of the New Age.

WHAT DO WE WANT?

We want to persevere in the struggle for survival of the Serbian people and the restoration of Orthodox faith among contemporary Serbs. Our goal is to return testamental Serbian ideals and values that have adorned our holy and glorious Ancestors.

We want to preserve our national being, both in terms of the fight against devastating depopulation and in terms of keeping the spiritual, cultural and biological heritage of our Ancestors.

We wish the Serbian state-national Home to be truly Serbian: to have a specific social structure that is built by the authentic Serbian spirit and Serbian interests. Therefore, we advocate the restoration of a genuine Orthodox monarchy, whose core idea can be expressed through the testamental Serbian vertical: God - King - Homekeeper.

We want Orthodox integrations instead of the so-called Euro-Atlantic integrations. Similar to local Orthodox Churches which are the branches of a single tree of the universal Church, the states of these nations should be parts of a single, strong international organism. In this way, the Orthodox nations will increase the possibility of their own spiritual and physical protection, as well as economic and cultural advancement.

At the European ideological scale, Serbian Action does not belong to "right-wing", neither "moderate" nor "extreme". We belong to Third Position groups, which point to inseparability of nationalism and the struggle for social justice, and thus are equally remote from the ruling democratic globalists (whether belonging to the left or right of center), as well as left-wing, neo-communist and anarchist groups.

Consistent professing of Serbian Idea, in this age, must have a national-revolutionary expression, that is an utmost negative disposition towards the ruling system, which is spirited with rotten mondialism, greed and materialism. Standing in these positions, Serbian Action considers itself a part of pan-European national front against Zionist-Atlantic occupation of our continent.